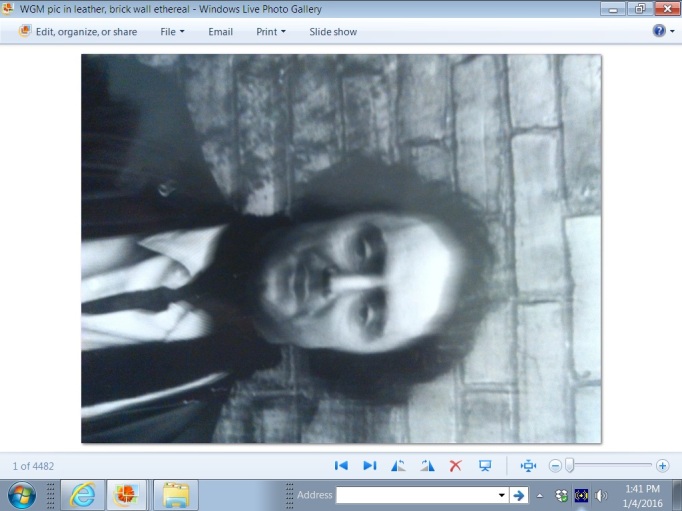 When I got to Easter Island, I rented a horse. There

are more horses than people on Easter Island.

that’s what I was told.  But you can’t always

believe what people are telling you. Sometimes they’re

just feeding you a line to keep themselves safe, or

they’re just fucking with you – maybe their T.V. is broken

for the day by giving you a hard time.

and I spent a long day, at first riding uphill through a small

forest. That was the beginning of the day, so I was still interested

and I caught a glimpse of something through the trees.

It was a long flat, slightly tilted structure – flat stone about

four feet wide, with gutters at either side of the stone. There

flat stone… Except there is nothing “normal” about Easter

I tied my horse to a tree. I looked back to see he

was happily eating tree leaves. He was not what you’d

call an over-fed horse. I could see his ribs. And he

wasn’t calm either, but for now he was O.K.

The flat stone was about thirty feet long. The

gutters carved in the stone on either side were about

into a catchment at one end. My thought was, “You

could sacrifice at least six people at the same time

in this place… tear our their hearts and raise them

aloft, so you could see them steaming in the sun.

Maybe they caught the blood in a large polished

let the blood flow into the soil of the Great Giver,

Maybe it was all quite innocent. Ho! Ho!

Maybe it was a place of secret bloody rituals,

or maybe they let the crowd in to watch. But the

point is – they don’t talk about this aspect of

Easter Island in the guide books, or the history books

The place was hidden by the forest and they

sure weren’t talking about it. Maybe those in

charge figured that such a barbaric little

corner of the world would scare away the straights,

frighten off the tourists – what few tourists

there are in that place. Not many ships go there

each year. I think maybe we were the only one.

The day was hot so I rode up over the hill.

The middle of the island is mostly flat and semi-desert.

Some prickly plants and some tufts of grasses and

rocky sand. When the wind came up it blew dust

and pebbles into my face.

It was real hot. I took my shirt off. But there

were nasty biting insects… and every 60 seconds

of so the wind blew sand and pebbles into my

He took to looking back over his shouder

and glaring at me – like I was the devil incarnate.

Finally we reached the ocean on the other side of the island.

Far as I could see there was no fresh water

I could see more of those statues along

the coast facing out to sea. A beautiful,

I would have gone along and visited

fifty or so more statues and checked out the

quarry where the statues came from,

but circumstances were not favourable.

There was a slight road along the coast.

A volkwagen bus passed me. Other people

from the ship waved their arms out the

windows of the bus. But the bus

Instead it blew more sand, pebbles

and dust in our faces.

the horse looked back at me. I decided

to turn back. We went a few hundred more yards

into this hot dusty semi-desert. That’s when

I discovered the birds.

There is a smallish

nasty hawk that lives in the interior of

the island. Not just one hawk, either.

There were many of them. They started

diving at us – me and the horse. From about

were trying to eat my horse’s ears as they

flew past, they ducked their heads and tried

to bite. And they were zipping right

This just about finished things

for my horse. He was not just glaring

back at me, he was trying to bite my

legs. He was pretty serious about it.

We had less than two miles to go,

so I took out my camel crop and whacked

his ass a few times. He bounded forward

about a hundred yards. Neither of us had

had any water to drink for some time.

I was starting to dream about the bar on the

ship and about 3 tall glasses of iced water –

then six tall iced glasses of vodka and tonic.

The dream faded fast – I was confronted

once more by this hot, dry and ugly situation.

A hawk swooshed by the horse’s nose and I

he managed to claw it a bit. It started to bleed

of wind and small rocks hit us in the face.

That was when the horse stopped.

He hadn’t quite been able to bite my

legs, but he kept trying. Now he refused

to take a step farther. I got off the horse

and gave him a whack or two with the

camel crop – but it was game over

I pulled the reins forward over his

head and walked in front of him. I had

to drag him forward by the reins. I’d drag

him for twenty feet, then had to stop.

I had to fend off the hawks with my other

It was a very long day – very dry

and unpleasant. With sharp spiked little

Ugly biting and stinging insects were getting

to drag the horse forward with one hand and

slap at the hawks with the other, windmilling

my arm. I put my tea-shirt on my head. And

I dragged my asshole horse all the way back to

A lot of people would have just left him

there in the desert. And I considered doing

that many times. But I manage to get that

I walked up the gangplank. People

were slapping my back and laughing and

wanted to shake hands: “WE SAW YOU OUT

THERE!” These were the people from the

all I said until I made it to the bar. I stayed

in the bar a long time. I washed my face

and chest in the sink. And I soaked my

tea-shirt in water and put it on my head.

I drank water like a crazed man. Then I

started in on the vodka tonics. I had

at least six of them before I said a

I took a picture of the

I recently found something else